The Emissary Movie loves Washington Island! Plus, read an excerpt from the upcoming novel.

We were warmly welcomed and thrilled to play for the Trueblood Performing Arts Center this Labor Day weekend, thank you to everyone who made it possible! What's next? We just might land at Newport State Park during a new moon this month...stay tuned! 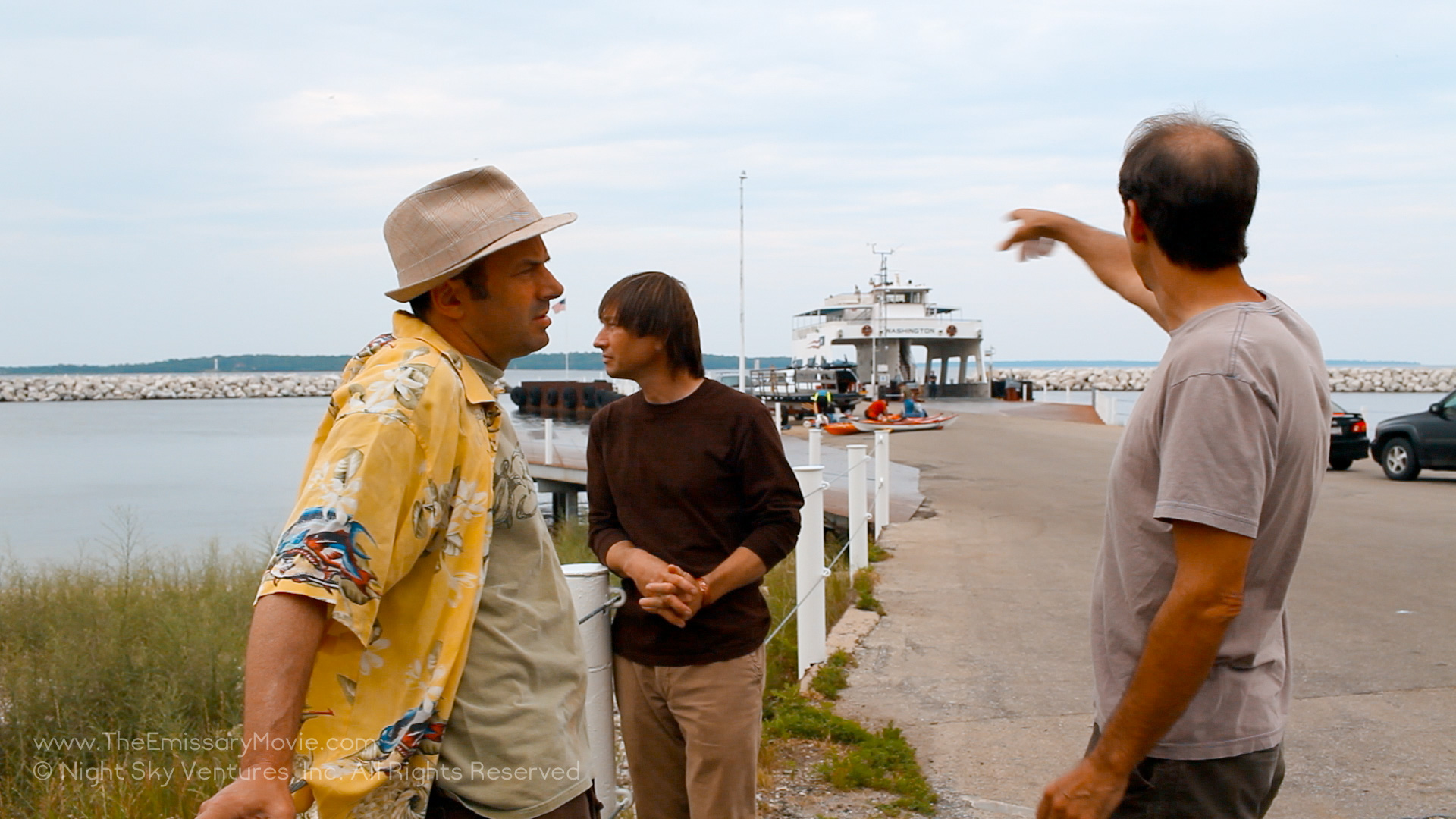 Jim extended his arm again to the north. "And beyond Death's Door is Washington Island."

Read the spoiler-free excerpt from the upcoming Emissary novel below:

"How do you overcome the speed of light limitation?" Jim braced himself, anticipating Koyper would again verbally pull back to censor his information.

"Oh. We don't. A ship cannot travel faster than light!"
His easy answer surprised Jim. Koyper smiled at him knowingly, as if he could see all the questions that had been stirred up and were now swirling around his head like a swarm of bees.
"And for communications, we use entangled photon relays."
Jim fell silent. He had a lot to think about.
His tires scrunched around the parking lot of the Washington Island car ferry. The three of them got out and stood looking out over the dark blue water.

Koyper bent to examine the jewelweed energetically pushing up between the round, grey rocks jumbled along the edge of the shore. He plucked at the leaves, and swiftly removed one of several small metal tubes from his backpack to add the specimen to his collection.
This was about as far north as Jim could take them, unless they booked passage to the island. Jim wondered if they could spare the time. Did they need to search the island for the generator? The island was part of Door County, too. A search by car over the island's twenty-five square miles might take a few hours, minus the time spent on the ferry. And they still had the entire peninsula to cover.
Jim began to pace. Think! He scolded himself, trying to keep his panic under control. We should decide whether or not to board the ferry, he thought. Soon. Even now cars were lining up for the Arni Richter. The island's dependable old workhorse pulled impressively into the dock. If they didn't board this ferry, they would have to wait for the next one, and time was precious. They had to preserve every minute for the search.
It had been months since Jim had taken Andy to the island. They were overdue. A few times every year they would visit Aunt Martha and Uncle Bob, who generously let them hang out in one of their tidy little rental cabins on the western shore. Furnished with Martha's chic array of midcentury modern Scandinavian furnishings, the cabins were a real treat. Entering one of their cabins, Jim had always delighted in the perception that he was setting foot inside a Mondrian painting, with Martha's use of bold, primary colors. After coffee at the Red Cup, they would ride their bikes everywhere, and see how far they could manage to submerge themselves, an act they euphemistically called swimming, in the perpetually frigid waters off Schoolhouse Beach. Jim figured it was something about the relaxing atmosphere that caused Andy's chorus neurosa to predictably go into remission for an irritatingly short period of time, usually just a day or two at most.
If they went to the island today, there would be no relaxing.
Jim looked to Koyper for guidance, but he was staring intensely out at the water with a complicated expression. He's sad, Jim thought. Feeling like he had intruded on something private, Jim found himself looking away.
He imagined introducing the spaceman to his aunt and uncle. Hey, this is Koyper, he's from outer space, and he says we have to find a lost alien spaceship generator before it blows up and kills us all. No, probably not. His family was open minded and kind hearted, but that would be a hard sell.
Martha and Bob, like the almost seven-hundred other residents, many of whom were descended from the original Icelandic settlers, were generally a tough and pleasantly eccentric folk, capable of appreciating the rare serenity of undeveloped pastures, woods, and waters. Being on the island always felt like traveling back in time. Even so, a quiet concentration of nominally retired people with advanced degrees remained active in pursuits as diverse as natural history, theater, fabric arts, and lavender farming. They prided themselves on their self-sufficiency. Sure, they had the internet, but they could live very well without it when it went down, and they didn't need superstores either.

Jim admired the islanders. They tolerated the invasion of the chattering mainland families touring on the Cherry Train, noisily looping around their otherwise peaceful streets during the warmer months. They also displayed a remarkable hand reflex, the Washington Island wave. Islanders persistently granted a polite wave to anyone passing by, even though Jim was quite sure the novelty of having people drive by must wear off fairly early in the season. There were times when he found himself wondering if he had the stamina to become an islander himself, which he might just do someday if life on the mainland became too much.


"This is Death's Door Passage." Jim swept his arm around indicating the waters between Gill's rock and the island. "Lots of ship wrecks out there."
Koyper leaned on the nearby fence, nodding soberly. "I know about this place. I have studied it from the space."
They watched in silence as a man skillfully choreographed the unloading of cars packed with families returning from the island, as two more cars joined the line to get on board. Jim resumed pacing. He counted the cars in line, and tried to calculate how much time they had before they had to make a decision get in line themselves.
Koyper's lips turned town pensively as he continued staring out over the waters with a thoughtful expression that was hard to read.
"Any signals?" Andy asked at last.
Koyper shook his head. "Nothing here. We should start traveling down the peninsula."
Jim exhaled. That buys us a little time, he thought. He tried to tune out the jumpy feeling in his chest. The picture in his mind of Bob and Martha on the island still nagged at him. He knew he had to trust Koyper's instincts, but he also needed to be sure their search was thorough.
Jim extended his arm again to the north. "And beyond Death's Door is Washington Island." He attempted a lighthearted tone. "Lots of kooky characters over there."
Koyper's face remained serious. "Yes. I know."
"Well." Jim paused to digest this information. "We should get going."

With much gratitude to Jami Hanreddy for her sharp editing eyes on this excerpt.
All remaining errors are mine.

We tease the islanders in a loving way in the movie and we hope it comes across as affectionate. In fact, Tim didn't have the heart to blow it up even in a simulation, along with the rest of Door County. Watch closely during the campfire scene (visible in the trailer). Tim intentionally spared the island, generously hoping it would increase its residents' property values.

Also, for those of you who know the Wagners, Martha is in fact Tim's father's cousin. I would never want to include anyone without their permission. They read the except and said that were "very flattered to be included". I'm relieved.

On Mindfulness
The Emissary Movie News